Lake Roosevelt is known for record size Kokanee and Trout throughout the winter months. Thanks to the cooperative net pen project on Lake Roosevelt, one to four million fry/fingerling Kokanee Salmon and 750,000 catchable Rainbow Trout triploids are released annually. These fish feed on plankton called daphnia on the open waters of the reservoir which result in their beautiful, tasty red meat! The Rainbow Trout is a great strain of fish for smoking due to the extra fats in its meat. We target both Kokanee and Trout with various trolling tactics, baiting them with scented corn, nightcrawlers and even shrimp! We can help you catch these tasty fish YEAR ROUND! 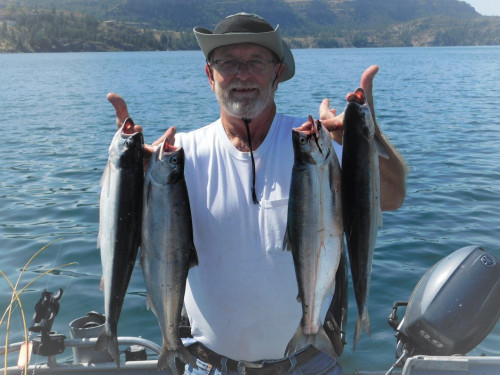 Walleye were introduced to Lake Roosevelt around the 1950’s and became well-known by 1969. Walleye have a bounty of food in the reservoir, feeding on small bait fish and crawdads. We catch this family favorite in BIG numbers year-round. We follow Walleye from the Spokane Arm to North Port.  We target them off the bottom by vertical jigging and trolling at depths from 20’ to 160’ feet deep! Depending on the time of year, we know when the bite is hot and when it’s not! Check out our Photos page under Spring and Winter for pics of happy Walleye anglers! 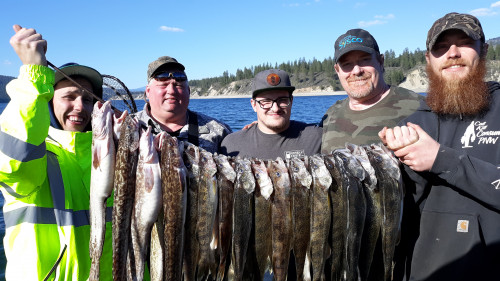 We fish Lake Roosevelt Burbot, also known as freshwater Ling Cod, from late fall all the way until the early Spring. We catch these tasty fish jigging for them on the lake as they fill up on crawdads and bait fish. Their size can range from 3 to 6 pounds. Burbot put up a great fight from the deep depths we catch them from. Lake Roosevelt has a great abundance of these fish to catch!  You are welcome to view our fishing report page to get the most up to date reports on them.

Please click the button below to book your charter today, and feel free to ask us any questions you might have when booking your day!